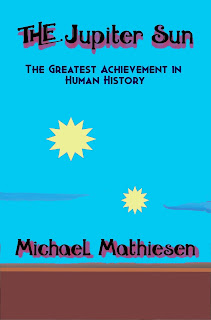 It may seem like Science Fiction, but there is a planet not so very far away that is up against the greatest threat that exists in the universe - self-annihilation.  They have come to the point in their technology that within the next 50 to 100 years they are either going to murder all life on their planet, including their own mass suicide OR they are going to turn their technological prowess into the greatest achievement by any life form anywhere in the universe.  It's going to be one or the other.  But this is happening not on another planet way out there in Space somewhere.  It's not science fiction any more.  This is our fate staring us right in the eyes.

The idea sprang out of my Science Fiction writings recently in a book entitled 'The Book to End All Books'.  In it, my characters and main plot develops into a very simple way to ignite the planet Jupiter into an actual sun.

Jupiter is known by astronomers to be a 'Gas Giant'.  This isn't a large man with indigestion.  It's a classification for planets that start to develop into a sun, but never quite accomplish the feat of a spontaneous fusion combustion that is required to be a sun.  These planets are filled with hydrogen just as the sun is, but that hydrogen never becomes hot enough or compressed enough to start the chain reaction under its own power.

The good news is that the Lawrence Livermore lab, a part of the Dept of Energy, within the United States Government recently cracked the code for a human made fusion reaction and actually created fusion in the lab.  They used high-powered lasers and more than 100 of them to aim them at a single spot in a magnetic bottle filled with Hydrogen atoms.  When they got it right, the fusion reaction started and produced more energy comingout than they had to put into it to get it started.

This was as huge first-of-its-kind and it made me realize from my earlier science fiction musings that the time had come where we could actually pull off what people will someday know as the 'The Greatest Achievement in Human history' - the ignition of a planet into a star.

This book not only explains the way that this can be done by SpaceX from Elon Musk, Blue Origin from Jeff Bezos and NASA from all of us, but it also shows in great detail how this could be our cheapest, fastest and best way out of our present conundrum of requiring so much energy produced by fossil fuels which is the basis of our whole economy and turning all of that infra-structure away from the climate emergency that it causes and towards the entire planet running on Solar Power - which will double as soon as we can turn Jupiter into our 2nd sun.

There are risks of course.  It could be the biggest flop in history, or the 2nd sun could produce so much more heat in our sky that we make things worse.  It is my best educated guess that the gradual over-warming of our planet due to a 2nd sun will actually be less than it is now due to the fact that we will no longer be forced to use fossil fuels any more, which will soon produce zero CO2 poured into the atmosphere and therefore, the greenhouse effect will decline, actually cooling our Earth and perhaps even in time to save us and all future generations.

Of course, educated guesses are not good enough to base trillions of dollars of investment that will be used to do this thing, and that's why this book is also a call to action to start the research and development of this concept so that we can have the confidence to go ahead with it or replace it with something better.   I challenge anyone to come up with something better.

I'm extremely pleased that Elon Musk said recently that he's going to resign as chief of Twitter because we're going to need all of his attention as well as others of his ilk on this herculean task as soon as possible.