The Green New Deal for Outer Space - IF we don't start a 2nd Sun in our sky - we will go extinct. Let's start learning and putting pressure on NASA and SPACEX

The Science of creating a 2nd Sun in our skies - It's not just science fiction any more! 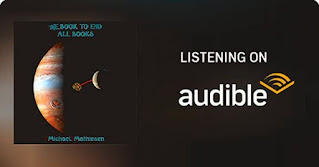 AUDIBLE BOOK - OUT NOW - CAN BE FREE~

Audible Books make GREAT Christmas GIFTS - Send Digitally to everyone on your list!
In my latest book - The Book To End All Books (Science Fiction) - I use the story of the next 1,000 years of Human history to show how we can perform the 'Greatest Achievement in Human history' - THE IGNITION of the planet Jupiter into our 2nd sun. I am the original creator of this idea. Prepare to hear about it a lot!~

I'm currently trying to convince NASA and SPACEX that this is possible and should be our next major goal in Space Exploration.

Background Information: The planet Jupiter is roughly five times the distance from the Earth than the distance from the Earth to the sun (Astronomical Units). However it is about one FIFTH the distance from Mars on average than Mars is from the sun. Jupiter is classified by astronomers as a 'Gas Giant' because it is known to be a planet that is almost completely made of Hydrogen. Jupiter and other Gas Giants are intended to become a sun by the process of FUSION when Hydrogen fuses into Helium and in the process releasing enough energy to warm neighboring planets in their solar system. However, Jupiter never achieved this kind of ignition of its Hydrogen most likely due to the fact that it is not massive enough to produce the pressures and temperatures at its core enough to self-immolate.

Oddly enough, at this point in Human technological development, we now have the ability to create artificial fusion, known as 'Cold Fusion' in the laboratory in a very simple procedure of firing laser energy at a few Hydrogen atoms and forcing them to fuse. The only reason we don't have Fusion Reactors commercially producing enough energy to solve our present energy crisis is because the amount of energy put into the Cold Fusion process on the Earth is far greater than the energy we get out due to the immense amounts of energy required just to hold the Hydrogen atoms in place.

On Jupiter, there are untold trillions x trillions of tons of Hydrogen atoms that are already held in place by the largest gravity force in the solar system outside of the sun. All the planet needs to fuse into a full sun is a little human intervention in helping a few milligrams of the Hydrogen gas to begin the Fusion chain reaction that is going on in the sun. We, meaning NASA and/or SpaceX can easily achieve this is a few robotic space missions. And - a 2nd sun is born in the sky.

There are a few minor experimental missions to be done first, of course. Then, there will be the ongoing discussion and associated fear-mongering that will ensue when the ordinary folks hear about such a project and wonder - rightly - about the amount of temperature increase we will have, how many days would have two suns in the sky, how many nights with full darkness we'll have, etc.

I believe it's in our interest as a species whose survival is now threatened by our ever-growing need for more and more energy, to begin such discussions and education ASAP.

I believe the scientific community will bear me out and be able to prove beyond any doubt that the benefits of the increased solar energy and light on our planet will be far greater than the loss of the polar ice caps. When we consider the much greater distance that the 2nd sun would be from the Earth and the size of the Jupiter sun, roughly one fifth the size of our present sun, it seems clear to me that the benefits will outweigh the risks.

For Mars the advantages would be far greater than any risks because Mars is currently 100 deg. F colder on average than the Earth and so it sorely needs a warm up if human habitation is going to succeed. Mars is much closer to Jupiter than the Earth and therefore the solar radiation from the 2nd sun would be much greater than the radiation from the first sun, twice as distant on average as it is from the Earth. To my mind, this gives us Humans about TEN TIMES the chance of surviving the next few hundred years because our current energy crisis and climate crisis would be a much improved one.

All of this of course, would have to be verified by the world's leading astronomers and Astro-physicists, climatologists, etc.

These are the kinds of issues I would like to present in my talks. Probably, in the beginning these should be held in College or University Symposia where we invite the Academic world to consider the topic and then debate me on their findings.

Later, upon realization that I'm right, we can expand our operations to any media who are looking for mind-blowing and inspiring programming. I firmly believe that the reason that we were given our chance at life here on this planet was to prove to our Creator someday that we were worthy. By actually creating another star in the sky - I think we meet that requirement.

The Science of creating a 2nd Sun in our skies - It's not just science fiction any more!

AUDIBLE BOOK - OUT NOW - CAN BE FREE~